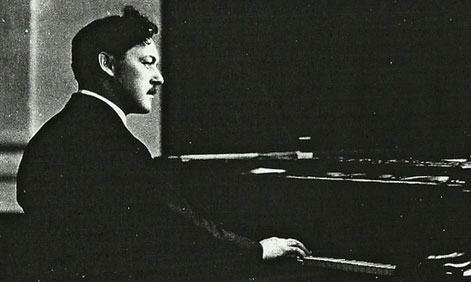 Emil Frey was born on 8 April 1889 in Baden, 25 km north-west of Zurich, and showed enormous musical talent even as a young child, and so his musical education (piano, composition, theory) began very early. Until 1897 his teacher was Ernst Markees in Basel, and from 1898 until 1902 he studied in Zurich with Robert Freund, a former student of Liszt. Frey continued his studies in Geneva, where his teachers were Willy Rehberg (piano), Otto Barblan and Josef Lauber (both composition). In 1905 he moved to Paris, where he studied at the Conservatoire: piano with Louis Diémer and composition with Gabriel Fauré and Charles-Marie Widor. In 1906 he received the Premier prix du piano at the Conservatoire, and his compositions first appeared in print, from Simrock and Durand. In 1907 he moved to Berlin, where he lived until 1910 (and perhaps later: the documentary record is unclear). Thanks to his acquaintance with George Enescu – probably from his days in Paris – he was introduced to Queen Elisabeth of Romania, a patroness of the arts, and herself a writer under the pseudonym Carmen Sylva; Frey wrote songs to several of her poems. Although still living in Berlin he was appointed official court- pianist to Carol I, King of Romania. In 1910 Frey participated, as both pianist and composer, in the international Anton Rubinstein competition in St Petersburg, winning a special diploma in piano and the Grand Prix in composition with his Piano Trio, Op. 23, and Piano Concerto, Op. 24. The chairman of the jury was Alexander Glazunov, who recommended the young Swiss composer to the Moscow Conservatoire. Frey was therefore invited to join the staff and, after his arrival in 1912, taught piano alongside such luminaries as Nikolai Medtner, Alexander Skryabin, Konstantin Igumnov and Alexander Goldenweiser. Frey also concertized in Russia, mainly during the holidays, and soon had played in all the major cities of the Russian Empire as well as across Europe. After the Russian Revolution of 1917 he was obliged to move back to Zurich, where he was invited to found a piano-soloist class at the Conservatoire. From 1925 he shared this responsibility with his pianist brother Walter. He continued to perform as a pianist and even travelled twice (in 1927 and 1929) to South America together with Walter. Frey remained in Zurich as a teacher until his death, from a stroke, on 20 May 1946.

In 1933 his Bewusst gewordenes Klavierspiel (‘Piano-Playing Become Aware’), a book on technique which illustrated musical advice with exercises, was published, and during the next decade Frey was often invited to join the juries of international piano competitions, such as the Chopin Competition in Warsaw in 1937 and the Geneva Competition in 1940 and 1945. Besides his professorship at the Zurich Conservatoire, he continued to perform and to write a good deal of music. At his death, he left a musical legacy of over 100 works, mainly music for piano solo, but also a lot of chamber music in different formations, art-songs, choral music (including a Mass) and orchestral works, among them two symphonies (one with a choral finale) and concertos for piano, violin and cello. Most of these works remain unpublished.

Contemporary criticism and musical memoirs agree that Emil Frey was a very gifted pianist with a superb technique and considerable musicality. But his music has occasionally run into some critical flak, not least because Frey the composer was often influenced by the outstanding composers with whom he came into contact, sometimes to the detriment of an individual style. The influences on his compositions can be broadly divided into four periods:

As an interpreter, I often find that Frey's music is rich with musical ideas, but for that very reason it can sometimes be difficult to find an all-embracing homogeneity and to put all those ideas into a convincing line. There’s no question, though, that all his piano music is written very pianistically: one can easily see the virtuosity of his playing in most of the pieces.